A Martian meteorite is a rock that formed on the planet Mars and was then ejected from Mars by the impact of an asteroid or comet, and finally landed on the Earth. Of over 61,000 meteorites that have been found on Earth, 132 were identified as Martian as of 3 March 2014.[1] These meteorites are thought to be from Mars because they have elemental and isotopic compositions that are similar to rocks and atmosphere gases analyzed by spacecraft on Mars.[3] On October 17, 2013, NASA reported, based on analysis of argon in the Martian atmosphere by the Mars Curiosity rover, that certain meteorites found on Earth thought to be from Mars were actually from Mars.[4]

The term does not refer to meteorites found on Mars, such as Heat Shield Rock.

On January 3, 2013, NASA reported that a meteorite, named NWA 7034 (nicknamed "Black Beauty"), found in 2011 in theSahara desert, was determined to be from Mars and found to contain ten times the water of other Mars meteorites found on Earth.[2] The meteorite was determined to have formed 2.1 billion years ago during the Amazonian geologic period on Mars.

Here some specimens that the alien was hatched out from the meteorite. 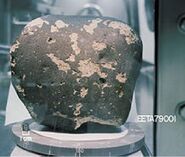 How to add water to Martian meteoriteEdit

Ok here's the thing is to make an instant pets.

Step 2: Place a Martian meteorite to a fish tank.

Step 4: Aliens will hatch out from a meteorite.

Retrieved from "https://epic-refresh-dx-science-lab.fandom.com/wiki/Martian_meteorite?oldid=5380"
Community content is available under CC-BY-SA unless otherwise noted.